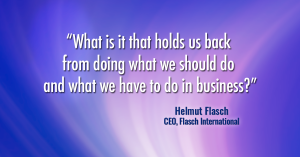 Personally, I would take this idle wishing to honest needing up one more notch and say from ‘idle wishing’ to ‘demanding for things getting better.’

If you look at it – there is quite a big difference between knowing you need to and actually acting on it. Wishing that things get better is what all the 95% of people who will retire on social security at age 78 or 83 are doing.

Maybe, only maybe, a few who know they “need to do something” will actually do something.

However, the ones who demand that things get better, the ones who say enough is enough, the ones who realize that no matter what he risks in engaging in a change of action, doing nothing simply will be worse, will act against any and all odds.

Those who choose to change and even take risks are the ones who also realize that they will be suffering from being overworked and underpaid and the agony of failed dreams if they do not risk. And then if things do not work out, those individuals will risk again and again.

As Mr. Robert Kiyosaki, the author of the bestselling book “Rich Dad, Poor Dad” says in this book: “I have never seen a successful person who has not lost a lot, but I have met many poor people who have never lost anything”.

After all, a doctor or a businessman who does not have $100,000 or sometimes not even $10,000 to lose, obviously has no life anyhow and will live a very unsatisfactory life at least.

It is a bit like being a prisoner of war camp, knowing that it will be for life with a lot of suffering. Why on earth would you not try to escape despite the chance of little success and probably death? You have only suffering with no chance of life anyhow.

The nice thing, and the big difference, between the war example above and the business example is that no matter how wrong things go in the business world, it is only money.

The truth of the matter is, believe it or not, anyone not willing to lose will never ever make any money.

The only ones who attract money like a magnet are the ones who have no fear of losing. And that my friend can be seen in all endeavors of life.

Sport is one of them. Only the one who is there for the game and is willing to risk to fall and to fail and who gives it all – all the time – will be the hero of all times.

People do not care about your reasons why you could not achieve something. People will not remember any of your failures after you have won, in fact they will parade you as an idol because you have overcome all obstacles.

Almost all success stories start with “I was totally broke, and that for the 3rd time and then…”

The all-time best baseball player Babe Ruth have proven by action that flunking out is the only way to make it.

A hint on how to not get too marred down in today’s problems: Look at the future, see yourself succeeding, see yourself taking the appropriate action in the future for even bigger goals than you have now.

Make the reaching of your new future goal, a much bigger problem than you have now, by making the goal humongous.

See yourself tackling, maybe even failing at much bigger problems than you have now. The problems you have now are only big because you are not engaging in even larger problems.

So is being broke and overworked, with no hope of turning the situation around because all you see is your immediate problems with ONLY an ‘idle wish’ to have a better life.

PS. Talk to our office on how you could increase your take-home income drastically without spending more time at your office.