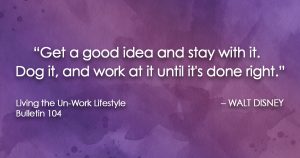 “Get a good idea and stay with it.  Dog it, and work at it until it’s done right.”
– WALT DISNEY

I guess Mr. Disney was saying, “persist”, or did he also say believe in your ideas?

My experience working with doctors, with small and very large businesses for over a decade has shown me that most ideas are good.

Yet I shall ask what makes people in most professions fail?

They don’t stay with it, don’t dog it and don’t work until it’s done correctly.

Every time you start an idea, relationship etc. and say “I will do it for an X amount of time or till X amount of money is spent and then I’ll walk away,” you’ve already lost before you started.

The point is, if you think it is a good idea, then do not hesitate to follow your plans or thoughts till it all works out.

Try it a few times and see your life change for the better!

As they say – “it’s not over until the fat lady sings!”

But you know –too many people are already afraid of starting something new for fear of failing.

They are gun shy from their own experiences and from the stories of other failures.

They are worried of what people say and are perhaps even more worried that someone else might have gotten the better of them.

It’s a shame, because you cannot hit a target that you did not shoot at.

Most success stories of most entrepreneurs are strewn with failures.

To just think that one can know when you will win and when you will not win, is a kind of foolishness all by itself and has kept otherwise good people from the freedom success brings with it.

He was fired, could not be hired, bankrupt, etc.

He said something like “If the thing you are starting does not scare the shit out of you then it might not be worth doing it anyhow.”