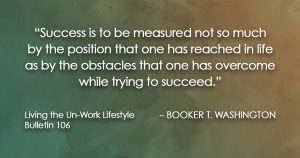 “Success is to be measured not so much by the position that one has reached in life as by the obstacles that one has overcome while trying to succeed.”

When young, I was following the ski sport and one year, during the Olympics, one of Austria’s skiers (Karl Schranz) got disqualified. He was not allowed to ski during the Olympics. Everyone, not only the Austrians, were betting on him.

But because Schranz did not compete, the winner, who according to the world’s opinion would have been second, was not a winner in the world’s eyes.

Don’t wish obstacles away! Look for them, look for them hard and then do whatever it takes to overcome them! It will be the most exhilarating life you can imagine.