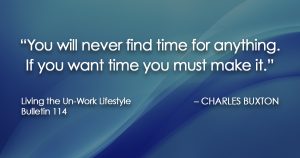 “You will never find time for anything. If you want time you must make it.”
– CHARLES BUXTON

Many years ago, I have worked hard (90 hours a week, for about nine months in a row).

One man once told me that I was working too hard to ever make money. I replied that I love my job and that I made good money.

He smiled, patted me on the shoulder, and said, “I’m happy for you. But I mean real money, lots of money – you can’t make it while working so hard.” 25 years later, I understood what he meant.

Goal–Maker. Every organization needs a goal-maker like Kennedy, Gandhi, etc., setting goals such as “let’s fly to the moon!” The Goal-Maker usually does not perform the physical step of an organization. He just “dreams stuff up” so to say!

Manager. The executive should be putting a team together, making strategic plans. He should not perform the physical work; otherwise he has no time to direct and get the work done, which is his job. Every manager is, of course, some kind of a goal maker.

Workers. They are the people who actually do the work: Doing dentistry, typing, engineering, etc. (all falls under the category of workers).

Maybe you can’t exactly dump all work overnight. But for the business owner, who is usually also the goal maker, you must make plans and manage them so that in the end all you do is set the goals which will get planned by the management team and done by the employees.

Think how far you could get!

Managing and goal making happens to be better paid than heart surgery or any other “work”!

Because goal makers and managers can duplicate themselves; a heart surgeon or other worker cannot.

PS. Now, it bears to talk about the two economies which currently exist.

There is the industrial economy and the digital economy.

They are vastly different and the biggest difference is that in the industrial economy one is exchanging time for money.

Doctors are the ones who used to shine some 50 years ago when their time was remunerated far, far above most other professions who mostly also traded time for money.

But due to the “good” earnings it looked and was not a bad deal at all.

But now, now what is happening?

Doctors get cut their fees from the insurance companies, get squeezes for their own malpractice insurance, have more overhead costs with employees and are slowly even losing the freedom of deciding what treatment to give.

The trading time for money does not really work out so well in the digital economy.

Trading time for money always has an earning ceiling. In the digital economy rather, easy duplication brings with it not only an almost unlimited income, but the so desired freedom from location and time.

In fact, the digital economy is perhaps the most recession-proof thing ever. After all, the W.W.W. (world wide web) is MADE to do business in any part of the world without ever having to be there and is, of course, more flexible to change according to demand of goods or services in a particular area.

PSS. Check out our “too good to be true”, “stop trading time for money” Un-Work program.