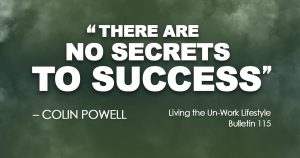 “There are no secrets to success: Don’t waste time looking for them. Success is the result of perfection, hard work, learning from failure, loyalty to those for whom you work, and persistence.”

Persistence is a key element missing in business people. It’s not that they are not persistent in some areas of their profession or of life in general. They DEFINITELY are, especially when it comes to being persistent in doing things the hard way!

Too often, business people tell me, “I have tried this or that marketing program for two, three, six or eight months. It did not work, so I dropped it.”

One or all of the following is usually happening:

Not having enough persistence to get the knowledge required to be able to pinpoint where the real break down is happening, is where persistence is missing the most!

PS. More than a decade after I wrote this let me add a few words.

Well, while this has definitely some truth in it, most of the time it also happens to be not the full truth.

They overlook the fact that all big breakthroughs we have witnessed on the planet came from single people who disrupted the status quo! They disrupted it majorly!

Now for those of us who are NOT too inventive this might look like a dead end.

We after all, DON’T have great new ideas and/or the money to follow through on them.

Let me assure you that this is NOT needed!

Neither a great idea nor the money – even though, you should not expect to save your business with NO investment in it (or better said in yourself) and it will all happen. No, it won’t – it’s just that you won’t need fortunes or even pocked loads of money.

We are living in the age (and always have, but more so now) where everything we need to DO THINGS DIFFERENT and OUT OF THE BOX is right in front of our eyes.

In fact, somebody is using whatever we need already! We do NOT NEED to reinvent the week, just use it!

You might have to build the wheel but the plan, the blueprint – is available for the taking only.

People, please wake up and first invest some time in finding out all the many, many ways you can travel to YOUR Rome and then start investing time and money into traveling one of the many roads!

A word of caution though – even if there are many roads NOT yet known to you – do NOT make the fatal mistake of wanting to engage in all or even in a few of them. NO, NO, NO. Start with one road! After you have made progress it is easy to add a second road and a third and so on – YES, but seeing too many opportunities and trying to do them all, will simply keep you in place where you are.

Believe you me, as you are speaking guy to a guy who has learned this the hard way and who as a business consultant for 30 years has seen too many business persons getting stuck that way!

As hint and a hint only – the industrial economy has switched to a digital economy and what happened to the horse and buggy will happen to most – literally most businesses if they do not adapt. In fact, many businesses WILL be gone and ONLY a premature change into something else will avoid major financial and thus personal tragedy!

PPS. Look at Dubai – they knew a long time ago that oil will soon be gone and thus they have been thinking out of the box early enough and went into tourism and commercial hubs!

The world is NOT standing still and neither should you, if you want to live a life full of comfort and pleasure!

In today’s digital economy, literally everyone can create a business which easily runs on the back of other technologies.

Find out how building an online infrastructure is not only making people rich, but gives them a freedom of time, location and occupation, which most people are pursuing but only a few ever achieve!

Give us a call and find out how this whole thing works.