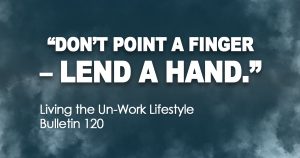 In our business, that means train your employees – spare no effort. Do not just put the blame on them. Help them do their job better. It will come back in many folds. Change always will come from us – no matter how much we think it is the other person’s misdoing.

After all, if you think you have bad employees, who hired them in the first place? Who does not train them? I hope you get the point because life will become beautiful and exciting after you do!

Let’s look at an even bigger picture as that of a practice owner or a business owner!

How many of you, doctors for example, have seen the time freedom as well as the financial freedom being squeezed?

Down to a level where being a dentist or doctor is NOT what you suggest in your heart to your kids or grand kids. Usually you do NOT even have to suggest it as they see YOUR lifestyle is NOT being what they want!

Not at all! And NO that does NOT make them bad, lazy and spoiled kids.

The new generation is much more into the new digital economy than into the industrial economy you most likely grew up in.

You see in the industrial economy trading time for money was the thing to do. And doctors fared well as they have been well remunerated for their time.

Is that still the case? Not really. Right?

But let’s get back to the profound statement of the unknown. Don’t point a finger.

It’s easy to say that insurance companies are unfairly pocketing all the profit by cutting your fees, the same insurance companies raise your malpractice insurance, or that the pharmaceutical and insurance in cahoots with the government are making you slaves who soon will not even be able to determine the treatment on the patients.

They will soon start to tell you!

You can point the finger at all those entities and happenings – yes – but it won’t help.

The dwindling spiral is long until reach a level of irreversibility!

But, who says that there are no other new and digital economy tools out there to give you everything you ever wanted and I dare to say – more than you imagine?

I am NOT even talking about leaving your medical practice, even though I know from consulting dentists and doctors for many years that many, many of you are thinking of quitting and the only reason you don’t do that is – you do not know any other skill which is respectable and could earn for a living.

What about those of you who would love to build that fantastic practice with 3-4 days off a week, and a reputation in the community which is second to none?

Oh, I forgot about the income which is far above what you imagine your practice could make.

Maybe the income will come from your practice – at least some, but does it matter if a second stream of income allows you to practice the way you want, which includes having all the free time you want?

Reputation worries? What about if you will be more admired, create a better reputation than making millions in the stock market?

Yes, call us. Maybe, only maybe we can stop you from having to point fingers at this. That is the reason why the medical profession did not turn out the way you wanted, but pointed you in a direction you will embrace.

PS. After this crisis caused by the virus, it became clear – the old economy no longer has its old days stability and security. In fact, most practice and business owners are still suffering from the consequences of this downturn.

Check out our new strategy of how building infrastructure in the new economy helps people not only to pass through the hard times but also gives them the freedom of time, location and occupation.

Give us a call and find out how to participate in the unbreakable economy.
Call: (800) 912-0510
www.unbreakableeconomy.com